David Walker is the senior strategic advisor for the global public sector practice at mega-accounting firm PricewaterhouseCoopers. He is a three-time presidential appointee, having served in the administrations of Presidents Ronald Regan, George H.W. Bush, and Bill Clinton, including as Comptroller General of the United States. In 2014, Walker ran unsuccessfully for lieutenant governor of Connecticut. 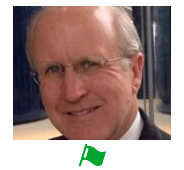 Sources tell me that Walker is a leading name amongst congressional Republicans for the board and, like many control board candidates that they are rumored to support, he has been an especially fierce opponent of the federal debt over the last several years. He was selected to lead the Peter G. Peterson Foundation (a prominent group that advocated for fiscal responsibility at a national level) in 2008, and started his own group, the Comeback America Initiative, in 2010 (which folded in 2013). He described the Puerto Rican debt as a “dire warning for our leaders at the federal, state, and local level” in a Washington Times op-ed in April.

In that same op-ed, he endorsed PROMESA as “a solution that would ensure additional transparency and accountability, provide economic incentives to enhance economic growth, facilitate a much-needed transformation of the commonwealth’s government, and include a means to restructure its debt and other unfunded obligations in an comprehensive and equitable manner.” A week after that op-ed published, he tweeted his support for Speaker Ryan and the PROMESA bill, declaring that it was not a “bailout” in response to controversy over the bill in Washington.

Having served 10 years as the United States’ chief auditor (the standard term-length for the comptroller), few people can match Walker’s bona fides in public sector finance, and the fact that he has been appointed by presidents of both parties only serves to underscore the respect that he commands on both sides of the aisle. His notable (but not exceptionally outspoken) support for Speaker Ryan and the PROMESA bill will no doubt endear him to PROMESA supporters, and while creditors that opposed the bill may have resented it at the time, there is little to suggest that he has any conflicted interests that would preclude him from service on the board.

Green Flag – David Walker boasts experience in public sector finance that few can match, and has been involved in debt issues for several years. A Republican, Walker commands respect across the political spectrum, having been appointed by three separate presidents, including a Democrat.