Harry Wilson is the founder and CEO of the “corporate turnaround” consulting firm MAEVA Group and a former “Hedge Fund star,” as described by the Wall Street Journal. His name has been thrown around in early media reports as a candidate for a control board spot thanks to his experience as a key member of President Obama’s Auto Task Force that handled the 2009 bailouts of Chrysler and General Motors. 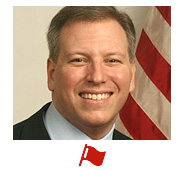 On the task force, Wilson was in charge of the “deals and diligence” team, which conducted the research the informed the task force’s policy decisions. He has since sought to leverage this role into a political career and is rumored to be interested in the 2018 Republican nomination for governor of New York, having run unsuccessfully for comptroller in 2010.

Before his time on the task force, Wilson had a successful, if relatively brief, career in the hedge fund industry. He worked originally at Goldman Sachs, before leaving to lead Blackstone Group’s foray into distressed debt investing – aka “vulture” investing. Following his time at Blackstone Group, he joined a former Goldman Sachs colleague at a hedge fund called Silver Point Capital.

Wilson’s hedge fund career officially ended when he was forced out of Silver Point in 2008, but accusations of conflicts of interest stemming from his time on Wall Street have dogged him at multiple stops since his retirement.

While heading the task force’s “deals and diligence” team in 2009, Wilson was embroiled in a scandal over the task force’s decision to sell a bankrupt auto parts supplier, Delphi, to a Los Angeles-based private equity firm. The deal would have forced a group of hedge funds including Silver Point Capital to accept huge losses on their investments in the company’s debt.

A more recent controversy occurred in 2015, when Wilson put himself up for a General Motors board seat as part of an activist investor campaign to force the company to buy back $8 billion of its own stock. The campaign was backed by a group hedge fund managers, including David Tepper and Kyle Bass, who owned roughly 2 percent of the company’s stock and who agreed to give Wilson a share of the profits generated by their investments in the company.

Given his extensive ties to the hedge fund industry, and the stakes that many hedge funds have in the restructuring of Puerto Rico’s various debts, it seems inevitable that similar controversies would arise if Wilson were appointed to a spot on the control board. Further, his rumored gubernatorial aspirations in 2018 raise further questions about his ability to play the role of independent actor in the interest of the Puerto Rican people, and his ability to meet the time commitments that will be required by the board.

In light of that, as well as his history with vulture fund investing and his apparent attempt to profit off of his role on President Obama’s Auto Task Force, there are simply too many concerns about Wilson for him to be considered for the control board.

Red Flag – There are significant concerns about Wilson extensive ties to Wall Street hedge funds, his ongoing political aspirations, and his previous attempts to profit off of appointed public positions. A Wilson appointment will compromise the independence of the control board.