Jose Fourquet is a Wall Street veteran who currently serves as managing director and head of the Miami Private Investment Management (PIM) branch of Lehman Brothers, which was of course acquired by Barclay’s after it failed in 2008. Previously, Fourquet also worked as the vice president of the fixed income, currency and commodities division at Goldman Sachs. 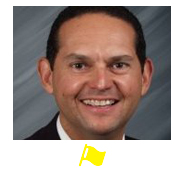 A Puerto Rico native, Fourquet is a well-seasoned and highly respected figure in the public sector – he was nominated by President George W. Bush, and unanimously confirmed by the U.S. Senate, to serve as the 12th United States Executive Director of the Inter-American Development Bank (IDB) in 2001. He also boasts a most unique credential on his resume (though not terribly pertinent to control board work) having worked for 6 years as a operations officer with the CIA stationed in Latin America.

His tenure at IDB is perhaps best known for the 2003 approval of a $75 million loan to finance a Peruvian natural gas project, which was spearheaded by the Argentinean company Pluspetrol. Fourquet was criticized for abstaining from the vote over whether to approve the deal rather than voting “no,” following concerns raised by US officials over the project’s environmental impact.

Likely due in large part to his Puerto Rican background, Fourquet has been considered a likely control board candidate for some time, and was amongst the first possible candidates reported by El Nuevo Dia. Beyond this, however, Fourquet has not been vocal regarding his stance on PR debt-related issues. As such, he is an unknown actor as to the issues PROMESA raises.

Yellow Flag – Fourquet is a finance veteran with significant public sector experience. However, simply not enough is known about his network here in PR with regard to potential conflicts to deliver a green flag right now.