José Ramon González is a former Puerto Rican banking executive who has served as the president and CEO of the Federal Home Loan Bank of New York since being appointed to the post in 2014. He has been among the most frequently-posited names in early press reports on potential board candidates due to his wealth of experience in the banking industry and his extensive ties to Puerto Rico. 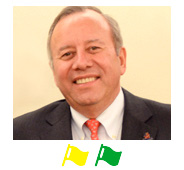 Admittedly, his tenure as GDB president may initially give some observers pause. After all, the GDB as an institution has played no small part in putting us in the position in which we find ourselves today, and it is possible that there are still some outstanding bond issuances with which he was involved. But it is important to remember that Ramon González left that position 27 years ago – long before the GDB began playing the toxic role of making loans to our government which it obviously could never repay, and when Puerto Rico itself was in a much stronger financial position. Since that time, he has gone on to great success in three decades in the private sector, making him one of the foremost Puerto Rican financial experts on this earth.

There are further concerns raised about Ramon González’s lengthy career at big banks before assuming a public/private role at FHLBNY. There is simply no avoiding the fact that his former employers, especially OFG Bancorp, are as deeply in the Puerto Rican debt. It is likely that questions about his time at big banks, and the professional and personal ties he maintains to them, will be raised if his name does indeed come up during the nomination process.

At the same time, however, Ramon González has more or less steered clear of the current crisis and, unlike other Puerto Rican bankers who will undoubtedly come up as potential nominees, he has avoided wading into the financial politics that have engulfed our island for the last few years. Quite simply, there are few Puerto Ricans who are as qualified for the job as he is, who have avoided taking public positions or campaigning on behalf of certain stakeholders with regards to the debt.

Indeed, the combination of Ramon González’s insight into the inner workings of the Puerto Rican public finance apparatus, his wealth of experience, and the fact that he has refrained from intervening in the politics of the current crisis makes him a person that I would consider for a control board seat – assuming that he can make a convincing case for his independence from the clutches of Wall Street.

Yellow-Green Flag – José Ramon González is highly experienced and very familiar with Puerto Rico and the finances of our government. Though he has ties to several big banks and the GDB – and, as a result, their involvement in our public debt – this should not rule him out if he can make a convincing case for his independence.

If you have a tip on who I should be profiling in the future, please submit it to the TIP box on controlboardwatch.org.