Lizzie Rosso is a name I’ve been hearing quite a bit about recently as a potential candidate for the control board. She is the former president of the Economic Development Bank of Puerto Rico under then-Governor Luis Fortuno from 2009-2011, and a former banking executive at both Doral and Banco Popular. Currently she serves as the executive director of the Latin American Business Council and a board member of the Foundation for Puerto Rico. 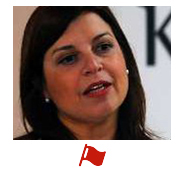 In her time at the EDB, she erased a $16 million deficit and issued millions in loans to keep small businesses and non-profits afloat in the darkest times of the recession, while turning a profit of nearly $10 million.

More recently, Rosso was named to gubernatorial candidate David Bernier’s working group, which is tasked with devising his five-year fiscal plan for PR. This is, for obvious reasons, a major flag with regard to Rosso’s candidacy.

PROMESA clearly does not allow for current or former Puerto Rican elected officials to be appointed to the board, for the sole purpose of keeping the board independent from Puerto Rican politics. No one who has been an advisor to a major candidate for office for 2016 should be considered. In addition, she was involved in bond issues that could be questioned and therefore has a conflict of interest

Red Flag – Lizzie Rosso is a Puerto Rican with more than two decades of experience in the financial sector, and with particular experience in facilitating small business growth in Puerto Rico despite the dire state of our economy. However, her position as an advisor to David Bernier raises serious concerns with regard to her independence from political forces here in Puerto Rico.