Patricia Eaves is the longtime general manager of Sprint Puerto Rico, the telecom giant’s business operation here in PR, a position she has held since the 1990s. She is somewhat of a surprise candidate whose name has come up recently and is rumored to be on one of the lists of potential nominees that will be submitted to President Obama in the coming days and weeks.In truth, it was a bit difficult to evaluate Eaves, because she does not have the widely-publicized financial background of some of the other candidates that we have profiled thus far. On the one hand, that makes her economic acumen and experience somewhat of an unknown. On the other, she has not been a major player in PR’s debt so far and, as such, avoids many of the conflicts that beleaguer some of the more high-profile candidates from the island and others who have been involved in previous major debt crises. 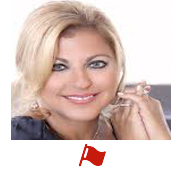 One thing is certain: in the past several years, as jobs, businesses, and people have fled Puerto Rico and our sinking economy, Eaves’ Sprint operation has been somewhat of an exception. In 2013 the company invested $60 million to build a 4G LTE network on the island and opened several new stores in PR. Last year, Eaves revealed plans to open 25 new stores in PR through 2016. Last year, she won praise from Sprint CEO Marcelo Claure, who said that she deserved merit for leading Sprint PR in tough economic times without necessary support from the company at large.

It is hard to draw a complete verdict on Ms Eaves. It is not clear that she has the necessary background to help reinvigorate Puerto Rico’s economy. Yet, she is one of the foremost businesswomen in Puerto Rico, and has lead Sprint’s effort on the island through our economic downturn. She and her company certainly have a stake in bringing growth back to our economy, and it seems that they plan on being at the forefront of that investment.

Red Flag: In my initial profile I gave Eaves a green flag, but her deep family ties to the PPD show deep conflicts of interest since the Board can alter this government’s decisions and laws. Given the vital importance of Board members being independent,  I am changing my verdict to red.