Phil Swagel is a professor at the University of Maryland’s school of public policy, where he teaches international economic policy, and a non-resident scholar at the American Enterprise Institute, a right-leaning think tank in Washington, DC. Prior to teaching at Maryland, he was a visiting professor at Georgetown Univeristy’s McDonough School of Business. 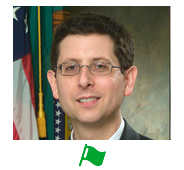 Most pertinent to potential control board work, however, is likely Swagel’s public sector experience. He was the Assistant Secretary for Economic Policy at the Treasury Department from December 2006 to January 2009, during the second term of President George W. Bush, where he advised on TARP policy. He was also chief of staff to the White House Nation Council of Economic Advisors, as well as an IMF economist and an economist at the Federal Reserve. Swagel’s experience at Treasury could be particularly helpful, because it would give the board someone experienced with the inner workings of the department without compromising the board’s integrity by presenting a conflict with the current administration.

Earlier this spring, he was critical of a bill that would require the Federal Reserve to consider municipal bonds as a “safe” investment alongside cash, treasury bonds, and debt issued by government-sponsored enterprises for the purposes of bank regulation, saying, “The Fed in its proposal went too far in allowing risky securities to be treated as safe, and the legislation would go yet further.” But, despite his obvious experience in the realm of public finance, his apparent involvement in the debate over Puerto Rico’s debt has been minimal. Likewise, there is nothing to suggest that he faces any notable conflicts in Puerto Rico or the current administration. Hence, he should be a fine member of the Board.

Green Flag – Swagel is an experienced financial mind with no apparent conflicts that should preclude him from board consideration.