The control board appointment process is  complicated, so first a quick review. President Obama gets to select all seven board members, according to the following criteria:

That means, for all intents and purposes, Republicans control the nomination process for four board seats and Democrats control it for three, though the appointments themselves will all be made by the President. Additionally, the governor of Puerto Rico is an “ex-officio” board member without voting rights. 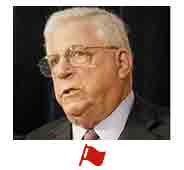 For my first candidate profile, I am choosing a name that has already been heavily rumored, and will no doubt be amongst the first offered by the Democrats for one of their three spots. That is Richard Ravitch, former lieutenant governor of New York and former chairman of the Metropolitan Transportation Authority.

First, some background; Ravitch was formerly head of the Metropolitan Transit Authority and the New York State Urban Development Corporation when New York City was in dire fiscal straits and was placed under a control board  of its own in the 1970s.

Because of this, Ravitch has become a favorite of Democrats looking for advisers during financial crises. Notably, he was appointed by bankruptcy judge Steven Rhodes (also rumored to be a board candidate) to advise the court during Detroit’s 2014 restructuring.

Although he is not lacking in experience, Ravitch is not a disinterested party.

When asked about his ties to Puerto Rico during a hearing before the Senate Judiciary Committee in December, Ravitch said, “I represent none in this matter.  I am not compensated for the time I have spent in the last year examining the fiscal situation in Puerto Rico.”

Yet, he served as an adviser to the Garcia Padilla Administration in the early days of its  campaign in favor of a full debt restructuring in the fall of 2015. While the uncompensated part may be true (reports indicate he worked pro bono), it can hardly be claimed that he represented “none” when he was advising the Puerto Rican government.

Some, including government watchdog group National Legal and Policy Center, have questioned this claim, and have raised further questions about Ravitch’s business ties with a bond insurance company called Build America Mutual (BAM as its commonly known) Assurance Company, on which he sits on the board of directors.

BAM is not exposed to Puerto Rican debt, and in fact, makes it known that it refuses to insure Puerto Rican bonds. Meanwhile, many of its competitors and other large bond insurers, like Ambac or Assured Guaranty, stand to assume big losses due to their own exposure in certain restructuring scenarios, which would of course benefit BAM. Under any reasonable interpretation, this presents a deep conflict of interest for a member of the board that will largely dictate Puerto Rico restructuring outcomes.

Put simply, there are clear instances of potential conflicts of interest, I must raise a red flag. The board’s mission, and its ability to carry it out effectively and in the best interest of the Puerto Rican people, hinges on its independence. There are many candidates with experience, and Congress should only consider those that are truly independent.

Red Flag –Ravitch’s background as an adviser to the Garcia Padilla Administration and potential conflicting business interests make him unsuitable for the independent control board.

If you have a tip on who I should be profiling in the future, please submit it to TIP box on controlboardwatch.org.