Robert Foran is the CEO of the Metropolitan Transit Authority, New York City’s public transportation agency – a position he has held since 2010. 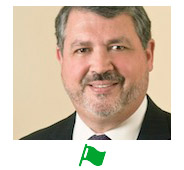 Foran is a municipal finance veteran, having worked closely with MTA since the 1980s, while he was a banker at Bear Stearns. He has long been viewed as a candidate for the control board, in large part thanks to his role in spearheading MTA’s $15 billion debt restructuring, which began while Foran was at Bear Stearns in 2002.

MTA has faced challenges during Foran’s tenure as CEO, notably coping with billions in damage to its rail systems in the wake of Hurrican Sandy in 2012. The agency issued $2.5 billion in bonds to cope with that damage in 2012, and has recently generated an additional $1 billion in savings by reducing energy costs and reaching favorable settlements with labor unions that have allowed it to pay less money into its pension systems – both of which are issues that the control board will likely have to confront in restoring economic stability in the Commonwealth.

Despite these victories, the agency still faces a $14.8 billion deficit in its five-year capital plan as of last year.

Like several recently profiled candidates, Foran has had little to no involvement in Puerto Rico-related issues, and faces no apparent conflicts with the Garcia Padilla or Obama Administrations. Given this and his highly relevant experience with MTA, I think that Foran would make a fine candidate for board consideration.