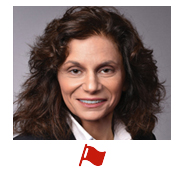 Sharon Levine is a bankruptcy lawyer at Saul Ewing in New Jersey. Hers is a name that has come up only recently, but she is rumored to be favored by the Treasury Department for the board, either as an appointee or in an advisory capacity.

For Puerto Rico’s unions and some politicians on the left, Levine’s involvement in the board would be a major victory. She has represented Unions in multiple bankruptcy cases, including AFSCME during Detroit’s Chapter 9.

Like Dennis Rivera, Levine should be barred from participation with the board at the outset due to her extensive ties to labor unions, who are a major stakeholder in the outcome of Puerto Rico’s restructuring. Unions are not mere clients for Levine – during a 2014 interview with Fox Business, Levine said, “What we saw in Stockton and what we saw in Detroit is that there is a realization, we hope there is a realization, that when you’re dealing with the most vulnerable part of your constituents, which is the retirees, that they should be protected at a level that is perhaps different than an investor that can have some in transportation, and some in municipal, and some someplace else.”

Whether or not you agree with Levine’s view, it is clear that one of the board’s primary responsibilities is to examine PR’s economy and its finances from a completely fresh perspective, and to use that untainted view to implement the most effective policies for bringing growth back to the Commonwealth. Appointing or hiring someone as an advisor to the board who has a clear agenda in the restructuring process is a non-starter.

Red Flag – Sharon Levine has a clear and stated belief that union pension systems should receive preferential treatment to other creditors in the restructuring process. Given that figuring out how to deal with Puerto Rico’s pension system is a central responsibility of the board, it is impossible for the board to maintain its independence if Levine is appointed or hired in an advisory capacity.