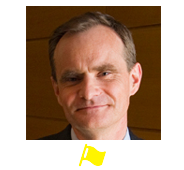 Simon Johnson is the head of the Global Economics and Management Group and a professor of entrepreneurship at the MIT Sloan School of Management, a senior fellow at the Peterson Institute for International Economics, a member of the Federal Deposit Insurance Corporation’s Systemic Resolution Advisory Committee, and a former chief economist at the International Monetary Fund.

Those who have followed the events of the last several months are familiar with Johnson, as he has testified at congressional proceedings related to PR’s debt crisis as well as other fiscal matters. Mr. Johnson has established himself as a go-to expert for federal lawmakers. He has testified multiple times on Puerto Rico, and has been published more than 300 times in the opinion pages of various publications in the past decade. He was a staunch advocate of PROMESA, arguing in a Politico op-ed that it was a good deal for bondholders, and writing off dissenting creditors as a small group of “holdouts.”

Because of this, it is unsurprising that Johnson’s name has been floated around, and, given his experience, it seems likely that he could be a candidate for multiple positions with the board, including as a congressional appointee or as a hired adviser.

However, I have reservations about whether Johnson is truly an independent actor, and whether he can be perceived as one by the people who he will be forced to work with if he is involved with the board.

Without doubt, he was deeply involved in lobbying in favor of PROMESA, and did not hesitate to side with the Treasury and Garcia Padilla’s Administration in their unfavorable depiction of Puerto Rico’s creditors before Congress – painting them as a menacing opponent to Puerto Rico’s best interest. Regardless of how you feel about this narrative, those same creditors will have a seat at the table throughout the control board’s work, and they will no doubt be reluctant to negotiate candidly if they feel that the board is already arrayed against them from the outset. The last thing PR needs is for bondholders to distrust the Board or question its intentions.

Yellow Flag – Simon Johnson will likely garner serious consideration for a number of roles with the board thanks to his resume and status as a favored congressional expert in the realm of economic crises. However, his outsized role in lobbying in favor of PROMESA – and against creditors with whom he will be forced to work as a board member – means that his involvement could complicate the board’s work.